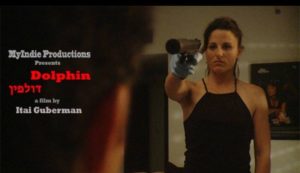 Dolphin is an Independent, Israeli short film (12 minutes) directed by Itai Guberman and stars Inbal Eizenberg, Asaf Angel and Daria Ilein. The film is entirely in Hebrew, however it has been subtitled for English Speaking audiences.

The film starts out at a party with a man filming a young woman showing him her necklace that has a Dolphin charm. The screen goes black and you hear what sounds like police or emergency services. Sound cuts and the scene changes to a young couple coming back from a date. Its during this time that the film begins its short but intense journey to its end. I can’t say more about the story without giving away all the juicy pieces.

For a twelve minute film, it covers a lot of ground. The performances are brilliant and convincing from all sides. Well written and superbly directed, Itai has brought us one of the best revenge films I have seen since “I Spit on Your Grave”…in only twelve minutes.

Be sure to look for Itai’s other films and shorts. They won’t disappoint. For a short film to cover as much as it has in its short time I have to give this a solid 8/10.