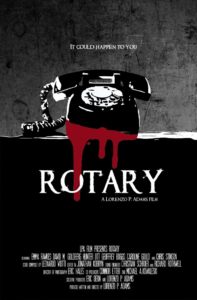 IT COULD HAPPEN TO YOU 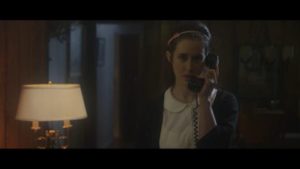 It’s March 18th 1950 on the outskirts of Columbia, Missouri and 13 yr old Janett Christman turned down an invitation to a party to make some extra cash and babysit 3 yr old Gregory Romack. Suddenly somewhere around 10:30-11p Officer Ray McCowen receives a call at the police station from a girl screaming hysterically for help. However, the line suddenly goes dead before any information can be gathered from the call. With no one  manning the test board at the telephone company, the call was unable to be traced. At approximately 1:30a  Mr. & Mrs. Romack return home and find Janett…her body in a pool of blood…raped and brutally murdered. The case was never solved! These true events not only helped to spawn the urban legend, “The Babysitter And The Man Upstairs” but also inspired horror/suspense films such as “Black Christmas”, “Halloween” and in particular “When A Stranger Calls”. What makes it even more terrifying is that it was taken from an actual case.

“Rotary” is a horror short which takes place in 1968. The film revolves around a young babysitter’s evening and is a retelling & different take on the urban legend of “The Babysitter And The Man Upstairs”. While there are variations to the story, the basic premise of the legend involves a young girl babysitting at night with the children upstairs asleep and the babysitter alone downstairs watching television. There is a phone call and a man tells her to check on the children. Dismissing the call she goes back to watching TV. After the stranger calls back several times the girl calls the police who tell her they will trace the call if he calls again. When he does the police call back and tell her the call is coming from inside the home and to get out immediately! She flees the house and is met by the police outside who tell her the man was calling from within the house after killing the children! This urban legend is inspired by true events and is loosely based on the tragic events in Missouri in 1950 along with similar incidents.

“Rotary” was written and directed by Lorenzo P Adams, an aspiring filmmaker based out of Washington DC. He developed a strong interest in film while studying mass communications and journalism  at West Virginia St University. His goal is to create films as a horror fan first and filmmaker second. He was influenced by fellow filmmakers Dario Argento, Alexander Aja, Alfred Hitchcock and “The Horror Master” himself, John Carpenter. The Indie horror/thriller is set to be released soon as Lorenzo enjoys his directorial debut. He talks about how he has “always been infatuated with things of the macabre, things that terrify us as human beings and terrors that have a touch of reality.” He goes on to say “this story in my opinion is one of the first kinds of home invasion horrors that predate films like “The Strangers”, “Straw Dawgs” and “Wait Until Dark”. It birthed the horrifying reveal that gave many of us nightmares and questions as to if we were really safe within our own homes. REALITY IS ONE OF THE ROOTS OF TRUE HORROR.”

Lorenzo shot “Rotary” over a 5 day period in Galax, Virginia and it is evident that he is a hard working, driven and passionate individual destined for success. He was quoted as saying how he “aspires to be one of the first African American “Masters of Horror”.” What is also evident and an important ingredient of success is his strong support system. Lorenzo has all the love and support from his friends and family one could possibly hope for. I was personally able to pick up on this just from the ongoing and countless messages of support I saw. It was a beautiful thing to see and made me instantly wish for nothing but unbridled success for Lorenzo, which I am confident he is well on his way to. Currently Lorenzo is working tirelessly to get “Rotary” submitted to as many film festivals as possible and he is hoping for it to premiere hopefully somewhere around mid to the end of Spring. Look for any updates regarding further film festival submissions and news of the premiere.

Emma is the film’s star, 17 yr old Julie Moore. As she makes her film debut she is already in possession of countless skills that she will be able to draw upon such as improv, singing, stage combat as well as various types of dance such as jazz, hip hop, waltz and square dancing. She is also musically inclined with the ability to play the guitar and ukulele. Emma has also mastered well over a dozen accents which will not only help her in her search for work but will also provide authenticity to the characters in those roles. She is also multilingual and along with English is able to speak French, German and Russian. 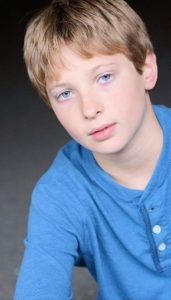 Keep an eye out for this young man! Rising talent Hunter Ott plays Robert, the young babysitters charge. He was born to perform and has been doing so from a very young age. He is SAG eligible and recently appeared in the television series “Chicago PD” & “Chicago Fire” on NBC. He also starred in “Night Of The Babysitter” and “Ted Bundy Had A Son”, both currently in post-production. Hunter has also appeared in over a dozen commercials including some for industry giants Disney, McDonalds and a Universal Studios “Harry Potter” spot. His young career has shown off his incredible talent and diversity with over a dozen theatrical performances, voice over roles and several modeling jobs for the likes of Aeropostale to Kohls. He has even been featured in several publications including being voted one of the top 20 models out of all international submissions! Hunter also won “Fan Favorite” in the national talent contest “Center Stage” beating out adults & others his age when he played Piano Man by Billy Joel on the piano, while singing and playing the harmonica. All this while accumulating numerous academic awards and while maintaining a 4.0 GPA! 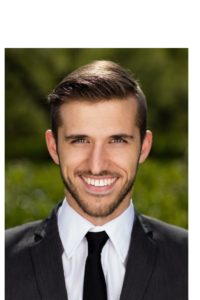 Geoffrey plays Mr. Franklin and has been involved in a variety of television series including Brain Games and Restaurant Stakeout. He has also worked on the short films “Imprisoned Souls” and of course “Rotary”. Demonstrating his versatility he was also involved in 2014’s comedy feature “Wildlife” as well as a stunt performer in 2017’s dark comedy “The Psychotics”. 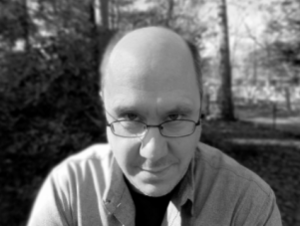 David Goldberg plays the “obscene caller” in “Rotary”. David also worked as the narrator of the docudrama “The Oxnard EDD (Employment Development Department) Shooting Massacre” which tragically took place in Oxnard, California in 1993. The documentary focuses on and revolves around the survivors of this horrible and unnecessary crime and is currently in post production. 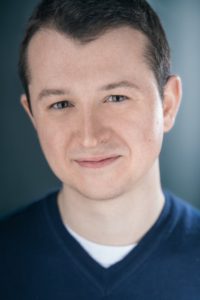 Chris portrays Rickey in the film “Rotary” and has appeared in several short films and television series such as “Legends and Lies: The Patriots” as well as the 2016 supernatural drama “Dinner With The Alchemist”. Chris is also an accomplished stage actor who was nominated in 2015 for a Helen Hayes award for Best Ensemble for his work in “Failure: A Love Story”. As I researched the play further I came across an article discussing the play when it showed at The Hub Theatre in Fairfax, Virginia and Chris’s excellent performance was mentioned on more than one occasion throughout the article. 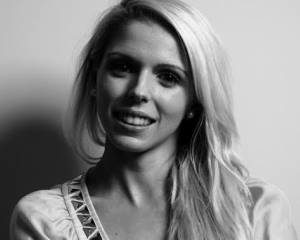 You are encouraged to view and enjoy the trailer by clicking on the link provided here – https://youtu.be/suGeUsCxIzM

Also please visit the “Rotary” Facebook and IMDb pages to enjoy more about the film by clicking on the links provided below. 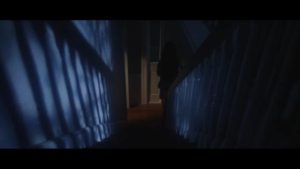