Lights Out: A Review By Tony Roca 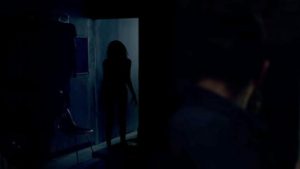 Hello again Freaks! That’s right, I’m baaaaaack. I thought I would take a break from the classics and review something newer for you. I also wanted to see what was out there for 2016 that I hadn’t seen. I was somewhat familiar with the concept of Lights Out as I had seen the short film that was released in 2013:

You can watch it here.

I have to say at the time I wasn’t all that impressed and I ignored it. So imagine my surprise when I stumbled upon the full length film. Even then I let it sit for a few hours before I dove in. So Freaks, grab some popcorn and beer, turn on all the lights and check your flashlight batteries. Here, we, go…

“You were right to be afraid of the dark”

There were quite a few things I enjoyed about this film. Let me begin by saying the actors all do a wonderful job. Even the actors in supporting roles are very believable in their delivery. I am usually very critical of child actors but Gabriel Bateman gives a great performance as Martin. Maria Bello is good as always and gives a great character performance of the unstable mother Sophie. Teresa Palmer (Rebecca) and Alexander DiPersia (Bret) also shine respectively.

I actually watched the film twice before writing this. Something I rarely do when reviewing a movie. I was compelled to do this after learning that David used all natural lighting throughout the film. It’s an idea that worked out perfectly and it sets a panicked thrilling tone in a film where the light itself is an antagonist of sorts. Even the different varieties of lighting used are brilliant. From UV lights to candles to flashing neon signs and car headlights and cell phones. You can tell it was well thought out. It’s executed perfectly.

The camera work in the movie is well executed too. The choices in whether to use tight shots or panoramic views, as well as steady or “floating” cameras was very impressive to me for a first time director. I think David has a good future in feature length films.

As for the story itself I feel it was very well fleshed out. i imagine it was very difficult to go from a three minute concept film to a one hour and twenty one minute full length feature. I feel like they tried to keep the story as “real” as possible while not giving too much away. I won’t get into details as this is a fairly new film and I don’t want to spoil it for anyone. I think this is the type of movie that works better if you go in knowing almost nothing and follow along as the story unfolds.

The visual effects in the movie are fantastic and I praise David for wanting to use as little CGI as possible and stay with practical FX. It makes “Diana” feel much more real.

I have very few criticisms of the film. There are a few plot holes and factual and continuity errors but you have to be really picky to even notice so I won’t get into them here. Overall I truly enjoyed this film. I’m giving it 4.5/5 stars. I recommend you watch it.

Lights Out is a film that started out as a three minute concept and matured into a well thought out story that manages to be thrilling without much violence or gore at all. It’s very much a paranormal psycho thriller. I’ve seen criticism of the movie for not being scary. To that I would say try to put yourself in the character’s shoes and use your imagination to get inside the film. I think if you can do that you’ll truly enjoy it. This is a movie that made it’s budget back in just the opening day it was at the box office. Also the house used in the film is the same one from Ouija and Ouija: Origin Of Evil.

Well Freaks, that brings us to the end of another review. As always, I have knives to sharpen and bodies to dispose of. See you next time Freaks!

I’ll keep the lights on for ya…