Jason Bigart of DAMMIT Landon Films just sent over the official poster for the short film we recently helped with. The film stars our very own  Josh Mabe and introduces Victoria Peril as Death. The film will be on the film festival circuit for a while before its release, but we will keep you up-to-date on where you can check out this film. Right now the first confirmed showings will be at Gen Con film festival in Indianapolis, IN this Sept and HMF Film  Festival this Oct in NC. 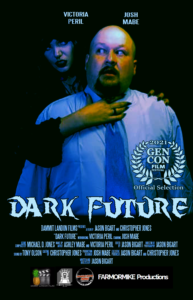