“After the death of her mother, an estranged daughter struggles to save her brother, and those around her from a malevolent faceless spirit.”

Despite what the misleading poster wants you to think, the first thing you should know about this movie is that it is about a chain. A killer chain. We know it’s a killer chain because of the red-tinted POV whenever anyone goes to touch it. These aren’t fancy chains, they’re just your standard haunted object chain that exudes a rippling CGI visual distortion chain. According to the intro monologue and montage an old Indian shaman was captured, chained and had his face flayed off so he put a curse on the chain as revenge. None of this was explicitly shown, in fact nothing is really explicitly shown in the movie.

If we compare this film to the Don Dohler’s formula of Blood, Boobs and Beasts we get a few drops of blood in the True Blood copycat title sequence. There are ample amounts of cleavage shots and even a flash of side-boob. And the beast? Well, you know what Slenderman looks like right? Just add more distracting CGI distortion to his face and you’ll get the idea.

Once out of the title sequence, the whole old Indian shaman flaying thing is discarded until tenuously recalled in the last fifteen minutes of the movie.
What we get for the most part is a bunch of admittedly earnest and sincere actors trying their best within their cliched roles. We’ve got the stoner, the slut, the nerd, the older sister, the handsome cop and a mother who dies by jump scare. It’s the soundtrack that is the real star here though. Hardly original but in keeping with the rest of the movie. It’s full of all the classic horror movie score tropes but elevates the film above it’s limitations with a solid sense of atmosphere. Although the film relies too much on the music to build the tension rather than what’s on screen.
The main problem is that this film it has many potentially great ideas and motifs that aren’t really connected that well throughout the story or just dropped altogether. There’s the haunted chain, an ongoing spooky water motif and there’s “Slenderman” and his soaking wet, long black haired and voyeuristic pal who is also afflicted with the same distorted facial CGI curse. These elements come and go through out but all seem disjointed until explained at the end.

What really hamstrings this film is it’s over reliance on CGI embellishment.
For all it’s faults, this film still has it’s own charm and sense of humor and stands proud on it’s PG-13 feet. I just wish there was more flaying. Might be time to rewatch Martyrs.

Flay is on VOD March 6th. 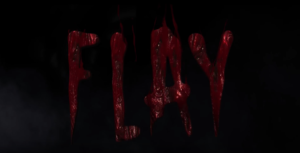 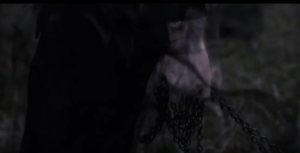 All screenshots taken from the trailer.