It’s your host with the most, The Dead Body Man! I’m back again to give you another review. This time I will be talking about M. Night Shyamalan’s newest film- “Split”. Now Night’s films are a touchy subject with most folks. Some are big fans of his work, others have a great distaste for it. I put myself in the middle.

So grab a beer and some popcorn Freaks, and let’s get to it!

Split is a unique film in many ways. It has a couple of plot twists and also a post-ending. This won’t be a long review as I am going to keep it spoiler free. I’m going to give a brief summary and then some thoughts I have about the film.

As the film begins, we find ourselves at a party. A socially awkward girl has been invited by proxy as a guest of a more popular group of girls. Unable to find a ride, the outcast girl is offered a ride from the popular girls and their father. A man ambushes the father and then enters the car. This is where we meet Kevin. Or Dennis. He knocks the girls out and kidnaps them.

We don’t really get a good idea of where they are trapped, but the girls wake up in a bunker of sorts. We meet the man who kidnapped them, Dennis. Later someone else enters the picture, Patricia, who is another one of Kevin’s personalities along with Dennis. She apologizes for the mistreatment of the girls and says they won’t be touched.

As the girls formulate a plan to get out, we meet Kevin’s doctor/psychiatrist. Kevin is now Barry. He tells the doctor even though an emergency meeting was requested by e-mail, everything is fine.  She is suspicious but believes him.

Back at the bunker we meet Hedwig. He is another of Kevin’s personalities, a nine year old boy. The girls attempt to convince him to let them go, but it ultimately fails. He also tells them about “The Beast”, a mysterious figure that is coming for them. The girls attempt to break out of the holding bunker but get caught and are separated. Eventually they all get put into separate rooms.

Who or what is The Beast?  Will the girls escape alive? Which of Kevin’s 24 personalities will take control? You’ll have to watch to find out!

First off, I want to say that while I was always a fan of his, this film solidified my love of James McAvoy’s acting. He is nothing short of brilliant in his role as Kevin (and the other personalities). He takes this film from a 2.5 to a 4/5 for me. Now if you like gore, jump scares, slashers or “traditional” horror you will not enjoy this film. It is very much a tight psychological thriller. There are a couple twists in the end (an M Night staple) and a post end scene that you must see. The final scene proves to me that Shyamalan knew exactly what he wanted to do with this script and has me excited for future films. All in all I found it to be a fun watch with a mix of humor and suspense and a nice wrap up in the end. I rate it 4/5 if not for McAvoy’s performance alone. I recommend it.

Well Freaks, that brings us to the end of another review. As always, I have knives to sharpen and bodies to dispose of. See you next time!

Oh and beware of The Beast…etcetera. 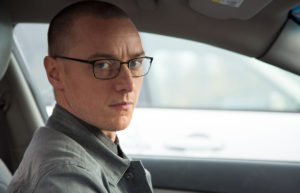