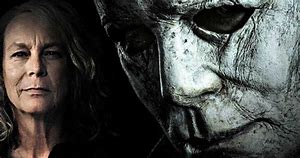 Well I literally just left the theater not more than 30 minutes ago from seeing 2018’s Halloween and I’m still soaking in what I just saw. I made sure to watch the ’78 original last night along with H2O for comparisons sake due to Laurie’s battle with Michael being showcased in each film. As most fans already know this screenplay and film was created with the idea in mind that this would be a direct sequel to the ’78 original and we would have to pretend that any and all sequels in this franchise never existed. That’s an interesting and unique task to ask of fans of a 40 year old franchise. That means no sequels with Laurie chopping Michael’s head off and no part 2 in which Michael becomes Laurie’s brother within the storyline. That explained his driving force in the films to come with him needing to kill his sister and finish the job he left incomplete. So with that removed from the equation, what is Michael’s obsession with Laurie now? They make an attempt at explaining things I felt and thankfully not in an overly convoluted way.

But with the 40 year time lapse I couldn’t help but go into this wondering if I was about to watch a “senior citizen showdown”. It didn’t quite reach that level and to be honest Michael Myers definitely brought the brutality with his kills in this film. In fact I can honestly say in my opinion this was the first time since part 2 and Rob Zombie’s first Halloween film that Michael felt “scary” or even menacing for that matter. And Laurie Strode, while at times reverting back to her H2O boozing habits, was certainly not one to be trifled with and even seemed to have a bit of Linda Hamilton from Terminator 2 in her. Judy Greer was quite good as Karen, Laurie’s daughter as was Haluk Bilginer as Dr Sartain (new Loomis).

However one of the biggest avenues of hype for this film was the return of Jamie Lee Curtis, Nick Castle and John Carpenter’s work on this film. To clarify, yes they got the “OG Shape” Nick Castle back to play Michael Myers, but only for one scene. In fact Castle’s scene is actually more of a cameo. He appears when Laurie first sees Michael in the film with his mask on through an upstairs window. The rest of the time Michael Myers is played by James Jude Courtney and for scenes when he is not wearing the mask, Tony Moran, which was also Tony’s role in the ’78 original. Still Nick Castle did do all of Myers breathing sounds in post production. And in reality this is nothing new. In 1978’s Halloween 5 different people wore the mask during filming including Debra Hill herself in one distant wide shot of Myers.

As far as John Carpenters role in the film, he gave Danny McBride, director David Gordon Green and producer of the film Jason Blum his blessing when they approached him with THEIR screenplay. So as I’m assuming most fans know by now, David Gordon Green directed this film, not Carpenter and it was co-written by Jeff Fradley, McBride and Green…not Carpenter. Although John Carpenter did sign on to score the film and I thought it not only complimented the film but without a doubt added a sense of dread to the film like only Carpenter can. Also Danny McBride is quoted as saying that Carpenter was “involved in every step” of the new Halloween and Carpenter is on record as saying “this new Halloween is the best since the original”. But take that for what it’s worth as most of the sequels were crap and his little feud with Rob Zombie was well documented. So was this hype train developed to excite and rally fans of the franchise behind the film? Good possibility. And they are obviously trying to sell tickets and ensure the film is a financial success. Carpenter has been openly quoted as saying “Every time a sequel is made, I get paid”. Boy that must be nice!

With a budget of only 10 million and opening weekend ticket sales estimated at this point to be at 75 million they have certainly set themselves up for success. Those kind of numbers will definitely help with the possibility of a new series stemming from this film as has been the talk. And on a personal level I love it when a horror film kills it at the box office. Yes, pun intended. It’s virtually impossible to recreate the perfect elements that all came together to make the ’78 original the masterpiece that it was. That type of an unstoppable slasher was new. Carpenter utilized quite a few new and/or groundbreaking filming techniques and on such a tight budget of only $325,000 and 21 days, his directing and filming had to be concise and extremely well planned out as it was. All that brought about that one of a kind feeling you got when you watched a film like the ’78 original. Even though it was filmed in South Pasadena and Sierra Madre California, Carpenter’s attention to detail including the use of bags of painted maple leaves created the atmosphere and feeling that you were in the midst of fall in Illinois.

With all that being said did I enjoy the movie…yes. I’m of the type that enjoys remakes, reboots and sequels. The originals are forever there for our enjoyment and at the same time we get new content with the characters we have grown to love such as Michael, Jason and Freddy.

Would I recommend horror fans and fans of the franchise to go see it…absolutely. Just temper your expectations. Not that there was any one issue with the film that jumped out at me but at least for the first 2/3 of the film I felt like I was just watching another installment, another sequel or retelling of the story if you will. But it asks you to forget key elements of the backstory that you have grown to know practically your whole life. At times it felt like Halloween H2O 2.0 with the backstory being retold through the cast’s dialogue and Laurie’s big battle with Michael. And there were a few attempts at some levity within the film but nothing I can hold against it. I’d say about the last 1/3 of the movie is where I felt drawn in and excited to see how things play out.

It will be fun to see how well this film ultimately does at the box office, along with its staying power and in the end what the fans truly thought of it once the hype dies down. It will also be interesting to see if it in fact spawns any sequels which will in effect take the franchise down an entirely different path. with it’s new storyline. Another benefit of this movie was it introduced many younger horror fans to Nick Castle as he made the rounds at the various horror conventions this year. Getting to meet him twice this year was without a doubt a huge pleasure. He has gone on to have a very successful career as a film director after taking off the mask in ’78. For the reasons stated I would give 2018’s Halloween….

out of 5 bloody knives