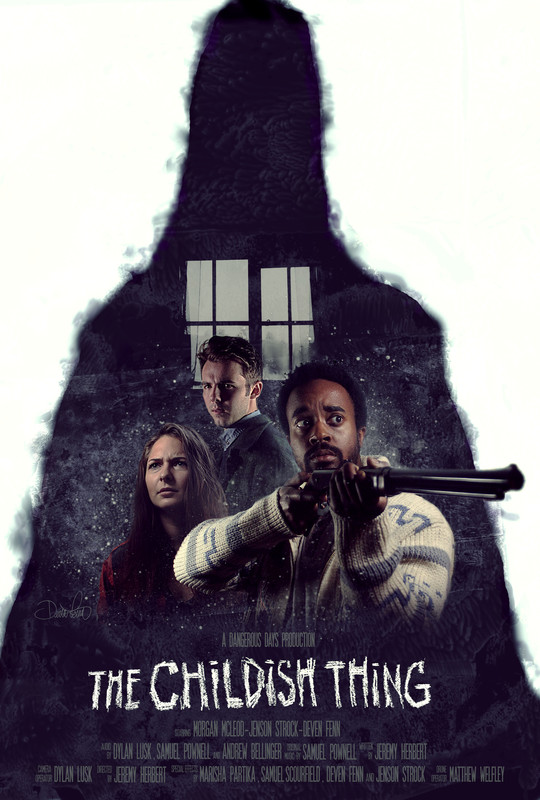 The Childish Thing is a 29:10 horror short written and directed by Jeremy Herbert. This Indie gem was originally released Sept 12, 2017 and was an Official Selection to Nightmares Film Festival in 2017 and was nominated for Best Ohio Short. The film begins with protagonist Jack (Morgan McLeod) receiving a voicemail from his mother directing him to begin going through and discarding any items not needed prior to their impending move. This alone is difficult for Jack as it’s the only home he, his mother and his now deceased older brother have ever shared together. As Jack begins to look through things he stumbles across a box labeled “Monster Hunting Stuff”. As a child Jack was haunted by a “Monster” and in the box are items Jack and his brother used in order to defeat or at least keep the monster at bay. Included are some drawings labeled “rules” which with the help of his mother and brother helped Jack deal with his fears. However, upon going through this box the monster reappears and Jack soon learns that some things do not want to be left behind or forgotten about.

Jack is forced to leave the house and meets up with two of his close friends in Hal (Deven Fenn) and Lane (Jenson Strock). They accompany Jack back to his house and sensing that Jack is going through more than he can probably deal with on his own decide to spend the night at his house with a few beers and a movie. A short while later Jack begins to open up to his friend Hal about the monster he dealt with as a child and all his loving, older brother did for him to help him combat his fears. The clever dialogue between Jack & Hal and Hal & Lane does a great job of providing a bit of a backstory for the monster, Jack’s life and the close relationship Jack had with his protective older brother.

The Childish Thing has a very personal feel to it and writer/director Jeremy Herbert is very open about personally seeing this monster as a child while dealing with night terrors. So he extracted these deep, dark memories as a child and put together they formed this genius screenplay. The film lacks all gore and over the top violence but the simplicity of its concept is without a doubt one of the films strongpoints. It had me thinking back to the things that used to give me nightmares as a kid.  Things I swore I saw and knew I heard and reminds you what “horror” was all about for you as a child. It seems like the type of film that could mean different things to different people. I’m not sure if the monster as a metaphor could have anything to do with personal trauma. But that, along with the story of Jack’s brother, is how it struck me allowing me to be able to personally relate to the film on many different levels.

This creepy tale boasts great sound, cinematography and production for a film on such a minimal budget. Jack, with all he has been through, is easy to root for and identify with. I truly loved the direction Jeremy took the film in particular with the lack of, and unnecessary, gore and violence. It has a throwback feel with the tension building and impending doom mostly left up to the imagination which is missing in the majority of modern cinema. I will include Jeremy’s Twitter handle so you may contact him with any inquiries on how and where one can view the film as well as to keep up to date on his and his teams projects. https://twitter.com/DDayFilms

Also included is the link to the trailer: https://youtu.be/P2gXjnbT588