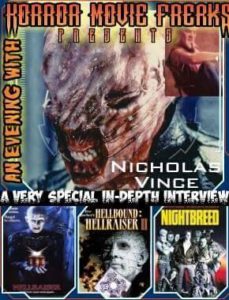 Chatting With The Chatterer

Horror Movie Freaks is extremely excited to bring you a horror icon widely known for his roles as Chatterer in Hellraiser 1 & 2 and Kinski in Nightbreed and who currently stars in and supports numerous independent films.

Read on for the interview!

Hello Nicholas, thank you so much for taking the time to join us. This must be a bit of a switch for you after being the one usually asking the questions on Chattering with Nicholas Vince, which we will talk a little about but first I was hoping to give our members a little insight into the beginnings of your career.

SI:  So you were born in Germany and I was wondering at what age you moved to the UK and what brought you there?

NV:  My father was stationed in Germany for 3 years, and I arrived 3 months before they came back to England. So, although I was born there, I really have no memory of that time. However, each Christmas when we were young, I and my brothers received Advent Calendars – with chocolates behind each date – from my Mum’s German friend Monica.

SI:  This is a bit of a 3 part question. What attracted you to the Mountview Academy of Theatre Arts in London (which I read is where you met Clive Barker) and what was Clive’s role at that time at the Theatre Academy? How did that initial meeting between the two of you occur?

NV:  I auditioned for a number of drama schools and Mountview was the one which accepted me. Clive didn’t have any role in the academy itself, but lived near by. Simon (Butterball) Bamford worked in Clive’s fringe theatre company, the Dog Company. He invited me to a party and I met Clive there. He asked me to model for him and so I appear on the covers to the Books of Blood which Clive illustrated.

SI:  What would you say was the biggest influence that drew you towards the horror genre? Did the Theatre Academy help steer you in that direction at all?

NV:  My love of horror was born a long time before I went to drama school. I used to watch the Universal horror movies and the Roger Corman / Vincent Price / Edgar Allen Poe on TV with my Mum. I also had three of the Aurora Monsters of Filmland kits, which had glow in the dark hands and heads. I think they were the Wolfman, Dracula and Phantom of the Opera.

SI:  When did you graduate from the Mountview Theatre Academy and were you involved in any theatre or film work leading up to your role in Hellraiser?

NV:  I graduated in the early 1980’s and I got my union card playing a rock singing dragon in a Christmas show. (It didn’t do very well as the film E.T. was released the same week we opened.)

SI:  Would you mind sharing a little about how the process worked for you in getting the role in Hellraiser? And secondly how you received the news and how you reacted upon learning that you did in fact secure the role?

NV:  I was living with my parents in Sussex at the time and Clive phoned to say I’d got the part. I was very calm during the call, trying to be professional. I put the phone down and jumped around shouting “Yes!”.

Clive had originally imagined Chatterer as being the family dog, as he’s the only Cenobite who actually touches a human during the movie, and I’d be leaping around like a chimpanzee. But when I did a costume test and crouched down, Clive didn’t like the way the leather folded at my knees. As it turned out I couldn’t see in the makeup, so we changed tack and I played him as still as possible.

SI:  I’ve always loved the lighting and way in which the Cenobites were presented on screen. It truly gave them an “otherworldly” look. And from what I gather the costumes had a variety of influences from punk to Catholicism. Who was involved for the most part in putting together the look and costumes of the Cenobites?

NV:  Clive did the original sketches and then the costume designer Jane Wildgoose worked with the maker, Rosemary Sylvester-Fisher, created them.

SI:  I know it took hours for all the makeup and costumes to be applied forcing the actors to arrive at 4:30am and the makeup artists even earlier to prep. I ask this in jest because I got a laugh when I read that not everyone on set were necessarily morning people and with you being such a positive, high energy individual, I was curious how your early and cheerful “good mornings” were received at times on set?

SI:  Some of the Cenobite actors dealt with some true visibility and even breathing issues when in full costume. And due to this lack of visibility you accidentally removed a bit of the roof of Ashley Laurence’s mouth during that scene when you had your middle and ring fingers in her mouth. Is there any truth to that story and if so what happened and how were things on set once that scene ended?

SI:  One of my favorite, most powerful and often quoted lines from the movie was when Frank stated “Jesus wept” before being pulled apart. I could feel the weight of that line especially as he smiled while delivering it. I understand this was actually an ad-lib by Andrew Robinson and was used by Clive instead of the scripted line “Fuck you”?

NV:  I’m not sure about how that came about as when that line was filmed I was back in the dressing room.

SI:  Is it true that Tony Randel was involved in part in the editing of the first Hellraiser? If so did you have any interaction or opportunity to get to know him at that time? I ask because I’m curious how different was it working with Tony as the director of Hellraiser 2 as opposed to Clive?

NV:  I didn’t meet with Tony on the first film, though I may have been introduced when he visited the set. Tony was nice to work with, though I obviously didn’t get to know him as well as I knew Clive.

NV:  I wrote a short story called “Look, See”, which was published in a magazine called Fear, when Hellbound was released in the UK. I wrote that Chatterer was once a fast talking standup comic, rather than a boy.

SCOTT LAKE:  With both being Clive Barker projects, how did your role as Kinski in Nightbreed differ from your experience in Hellraiser?

NV:  Kinski was more interesting as he had lines and some great scenes with Booth and Peloquin. Longer hours in the makeup chair as it took 5 hours for the makeup application. Generally speaking just alot more fun.

AMANDA BLAKE:  Could you share a little bit about your film Rats which also stars Laurence R. Harvey from The Human Centipede 2 & 3?

NV:  Rats was written and directed by Mark Logan and we filmed it last year in a real castle. I played the lead opposite Laurence who was tremendous fun to work with. It was a tough shoot as we filmed over two nights when the castle was closed to the public. I believe Mark has just completed the post production and he’ll be submitting to film festivals soon. Mark and I recently won a Karloff Award for being the best guests on the Without Your Head podcast when we discussed Rats.

NV:  Writing is solitary and although I enjoy it, I really enjoy talking and working with other people. Also, I’m very aware how lucky I am in terms of the heritage of the Hellraiser and Nightbreed films, and wanted to help independent authors and film makers by sharing their stories with some of my fans.

SI:  I’d like to truly thank you Nicholas for taking time out of your extremely busy schedule to share some of your memories and experiences with our group and your fans. I know we are all thrilled to learn a bit about your career and how a true horror icon got their start and enjoyed great success. Cheers and thank you again. Also a huge thank you to Zack Kelly, Amanda Blake and Scott Lake for your contributions.

Also some other very recent projects Nicholas Vince has starred in include:

M is for Metamorphosis (written/directed by Robert Nevitt) 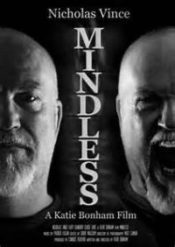 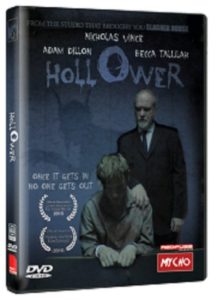 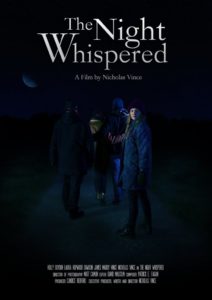 Books available on Amazon: What Monsters Do – http://smarturl.it/WhatMonstersDo