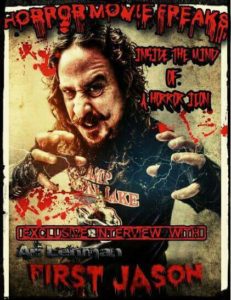 ZACK: You’ve been involved in a lot of underground horror projects as well as mainstream horror cinema…you have a style and persona that goes against the grain and you really have set your own path in your music and cinema career in a way that’s pretty admirable in my opinion as to not taking the easy way out and going mainstream…. what are your key inspirations and maybe idols that you look up to?

ARI: Thanks Zack that’s a great opening question. The artist that I feel that to me would best fit the description given here is FRANK
ZAPPA. I have been an ardent fan of Frank Zappa’s work since I was 14 years old, the exact same time I was involved in “Friday the 13th”. To me, the combination of the finest in musical talent and superb arrangements with intelligent and humorous lyrics that characterized the work of Frank Zappa throughout his career, especially the live shows at The Fillmore during the 1980’s exemplify what entertainment can be and really should be: a synergy of genius that goes beyond talent towards a deeper understanding of human limits and capabilities.

Frank Zappa always pursued a vision that was in direct opposition to the mainstream, and thereby created a new wellspring of inspiration for me and other musicians like me who grew up during the seventies and eighties. Also with songs like “ZOMBY WOOF” and of course the magnificently gruesome “THE TORTURE NEVER STOPS” Zappa reveals his own fondness for dark kinky Horror stories in explicit detail. In fact, one could say that Frank Zappa was one of the first Horror Rock artists: Alice Cooper was “discovered” by Frank, and recorded his first three albums on Zappa’s Bizarre record label. There was an energy of unbridled creativity that drew me to the work Frank Zappa and still does.

STEPHEN: I’ve read u were raised in Westport CT & I’m from New London so I’m curious is it accurate u snuck into the audition in Westport & at the time by doing so how it felt landing that role in Mannys Orphans & thru that getting the Jason role?

ARI: Yes, Sean was holding auditions at the Westport CT YMCA for a Comedy about Soccer called Manny’s Orphans so I snuck in because I did not have an agent. They handed me a script and somehow I landed the 80-line role of “Roger”, supporting the main character as a young wise guy buddy who is always talking about girls and reading a Playboy Magazine.
That film was great fun to work on, and I learned a lot about the process of filmmaking, however it was not to be officially released, due to the public’s general disinterest in Soccer. Realizing this, Sean decided that he would do another Horror Film, and he and Victor Miller devised the basic concept for “Friday the 13th”, set at a Summer Camp. I got a call from Sean, and he asked me “Can you swim?”, and that was basically the audition for “Friday the 13th” right there. Both sets were very well guided by Sean, who has a real talent for working with children and young actors, getting them to deliver their best work without over-doing it, and that is one reason that his films have found thousands of young fans I feel.

STEPHEN: Also could you describe what it was like playing keyboard in reggae & African music & in particular possibly share a memory that sticks with u while touring in areas such as West Africa?

ARI: Yes, I was very fortunate to perform with some of the top names in Reggae and World Music as a Keyboardist and Vocalist in the 1990’s, working for Interscope Records and Tuff Gong Records, the label that was owned originally by Bob Marley. During that time, I toured all over the US and eventually went on to travel to Abidjan, which is the capitol of the Cote D’Ivoire in West Africa. My original aim was to gain a deeper understanding of all of the sources of Music that ultimately led to the creation of Jazz, Blues and Rock.

One of the most amazing experiences I ever had was opening for Steel Pulse at the Palais de Sport, a huge Soccer stadium, in Abidjan. It was completely filled with thousands and thousands of enthusiastic fans, eager to see the first-ever Jamaican Reggae Tour in West Africa. I had the honor to be playing keyboards for the very wonderful singer from Jamaica named Ijahman Levi, and as we started the introduction I noticed that the African sun was blazing down fiercely. However, just as Ijahman took the stage, a small cloud hovered directly over the audience giving them blessed shade from the heat. Then, like magic, as soon as he began to sing, a gentle mist descended, cooling off the crowd. It was completely mystical!

ZACK: during filming of Friday the 13th you had the experience of a lifetime being able to portray an on screen roll of a horror icon that transcends boundaries, genres and is quite easily one of the most recognizable fictional characters of all time…can you tell us what it was like to be a part of a true cornerstone in American cinema at such an early age and what the experience of working so closely with Tom Savini was like applying and taking off all those appliances and makeup?

ARI: Soon after it was determined that I was to play Jason, I was introduced to Tom Savini and Taso Stavrakis, who did all the special effects work for “Friday the 13th” as you know. It was really cool to meet such creatively-minded individuals at that age, and seeing that they could actually make a living by doing their artwork and still express themselves freely, was a definitive inspiration to me, and in many ways you could count Tom Savini as one of my artistic and philosophical inspirations, even if we work in different fields. There was a feeling of comradery and interactivity in his studio which informed my approach to the arts as a profession.

Once we reached the set, this feeling was amplified by all of the crew and other actors all staying together on the campsite during the shoot. That experience alone is rather unique and had a unifying effect on the cast and crew that may indeed havea great deal to do with the success of the film: the film has a unity in and of itself. Of course until that final scene where some soaking wet kid jumps up out of Crystal Lake!
That final scene shot and added in two months after we had wrapped the film. Sometimes that sequence feels like it is part of an entirely other film – it’s surrealistic in a way. After waiting for hours while the special effect makeup that brought Jason to life were complete, it was truly surreal to behold my own image in the mirror. Anyone who has applied such a completely transforming application will tell you – that first look in the mirror to observe the final creation can be a bit overwhelming. Surrealism become real! IT’S ALIVE!!!

JOSH: What’s your take on the whole new trend of newer horror movies using a lot of jump scares now a days compared to how it was in the older movies where it would build up to the scare?

ARI: As time passes we see all sorts of trends from Horror to Slasher to Gore and now a tech-related video gaming style is dominant. In my opinion it’s all part of the process, and the actual content lies in the Story and Character development. No matter what format you may use, super-violent or unending suspense, set in the distant past or faraway future, it’s the story and characters that define the content that we in effect actually absorb. This is also true for all of the different formats: you may be watching on a 70mm screen, or on your iPhone, or projected holographical in 3D, but without a story line, characters, soundtrack and other basic elements of content, you are just looking into the air at nothing!

Therefore, if I see a film that entertains me, that draws me in like a storyteller or a good joke teller, and helps me and the audience to transcend time and space in that other world,I say it’s good, no matter the genre or format. My favorite Horror films draw upon the mystical realm like HELLRAISER, THE SHINING, DER GOLEM, NOSFERATU, FAUST, but also I like the psychedelic Giallo realm: DEEP RED, PHENOMENON, OPERA, as well as the first American Slasher NIGHT OF THE HUNTER starring Robert Mitchum. There are some fine works from the EU like THE ORPHAN and [REC]. I am always open to seeing new ways to tell the ancient story of the primeval struggle that embodies existence.

ZACK: one more question because I don’t want to take too much of your time your band FIRST JASON is obviously very much inspired by your portrayal of Jason Voorhees and your songs are generally titled along the theme as well…. being that the character himself never said a word, and your style very loud and in your face I was wondering if maybe you were telling the story of Jason Voorhees never told before from behind the mask?

ARI: FIRST JASON is the voice of Jason Voorhees. Many songs do put the inner working of his mind into words like RED RED RED:

“Alone, alone, alone I roam. Like a dog I start to foam.
All my muscles turn to stone, As I bite down to the bone!
Astray, astray, I am astray. Deep in the woods is where I stay.
Those who intrude become my prey. As I must eat they must die today!
RED RED RED rushing to my head. RED RED RED and the beast is fed.”

This song is from the JASON IS WATCHING album the title song says:

“A Mother’s grudge, turned into fury. Death was the judge, murder the jury.
Justice is blind, Jason sees all. His eyes will find; his foes will fall…
My eyes just can’t take any more. My Mother’s body bloodies the shore,
Of Crystal Lake, so I must take, vengeance upon, those who did wrong!”

This is the inner working of the mind of righteous vengeance gone horribly overboard, Jason is like a Viking Berserker Warrior, who once in a trance of battle would slay any and all that came within the range of their weapon. Jason is territorial beyond understanding because he sees his Mother’s image defiled any who dare trespass into the Crystal Lake world!!!

HMF: From all of us here at HMF, we thank you for your time, Sir. It is truly an honor!

ARI: MANY THANKS! HORROR MOVIE FREAKS RULES!!!
FIRST JASON is working on a new album as we speak and touring continuously throughout the USA. Please follow us on Spotify and CDBaby