Hello, FREAKS! Josh Mabe here. I’m sure if you follow any horror related pages on Facebook or Twitter that you have heard of this film. Ever since its debut to the film festival circuit, it seems to be all the rage. I mean almost everyone is talking about this short film. Obviously this peaked our interest here at Horror-Movie-Freaks, so we had to see it. But the big question is; Does the film live up to its hype? Take a look below to find out our thoughts on Alfred J. Hemlock. 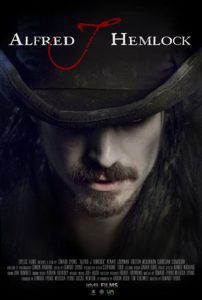 “When Emily’s boyfriend abandons her in the night, her only way home is through an alleyway where she is terrorized by the mysterious entity Alfred J Hemlock.”

AJH starts out with Emily being tossed out of a car in a dark alley by her jerk of a boyfriend after an argument. He drives away leaving her all alone,crying and hating her life. This when we meet the very mysterious Alfred J. Hemlock.  Hemlock comes in to free her of her empty life, but Emily decides that maybe life is worth living after all.

The first thing that really hit me about this film is the production value. The lighting and camera work on this 14 minute film is as good as, if not better than, a lot of the big budget films being released. From the shadows in the background, to the lighting of the actors, it was spot on. AJH also pulls off some very memorable scenes due to the brilliant look of the film . The first one that comes to mind is when Hemlock is skipping down the alley with an axe. Its creepy, haunting and beautiful all at the same time.

The second thing that I noticed was the sound. Sound is never an easy task when it comes to film making, but the crew on this film obviously knew exactly what they were doing. The minor background noises of the alley that can be heard, the volume levels throughout the film with the score and the dialog are all perfect.

The third thing, was the acting by the two leads in this film. Renaye Loryman(Emily) and Tristan McKinnon(Hemlock) did phenomenal in their roles. Emily’s character isn’t an easy role. She goes through a roller coaster of emotions in this little short. She goes from helpless, weak and ready to die, to strong, courageous and takes her life back by the end. In that journey, she literally  hits every character arch along the way.  And Renaye hits it with precision. Tristan as Hemlock is so memorable its amazing. The job he did building that character, with the mannerisms and voice, is nothing short of amazing. Hemlock has obvious hints of Johnny Depp, but it doesn’t come across as  a copy  like I was honestly expecting from the trailers I had seen. He used a some aspects of characters that Depp has played, but they are combined with Tristans own acting skills to make something new and original, while paying homage to some classic roles by Depp. Hemlock is a character that will not soon be forgotten.

As whole, this film is everything that a film maker dreams of creating. A visual masterpiece that grabs the audience from the start and doesn’t let go. I posed the question earlier; Does the film live up to the hype? The answer from me is a wholehearted YES! I have the chance in my work with HMF to view a lot of indie films, literally hundreds since the creation of HMF, and Alfred J. Hemlock has reserved a spot in my top ten horror shorts that I have seen. I am not alone in this either. Check out just some of the official selections and wins this film has received.