We recently had the pleasure of attending the Wreak Havoc Horror Film Festival in Greensboro, NC and wanted to take a moment to talk about the festival, as well as the films.

The event is held at the historic Carolina Theater in downtown Greensboro. This was the 3rd year running for the fest, and let me just say, they do an awesome job! The panel of judges really have a good eye at selecting some of the best horror films running the festival circuit.  The event is set with short film blocks, with feature films mixed in, and periodic breaks throughout. Dan Sellers and Sammie Cassell are the show runners here. Dan is the Festival Director, and President of Wreak Havoc Productions, LLC and Sammie is the assistant Festival Director, and Vice President of Wreak Havoc Productions, LLC. Both really great guys. Even though they were running around all over the place to keep things rolling, they still made to time to stop and talk to the people in the audience. Though, I may have talked to the point of annoying Sammie, HA! But seriously, Wreak Havoc Horror Film Festival gets the HMF seal of approval. Highly recommend checking it out next year, and for all you filmmakers out there, they start accepting submissions after the first of the year!

Now lets dig into the films. I’ll be reviewing my top picks from the event, and in the order in which they screened at the festival. This will be a brief rundown, and spoiler free(for the most part) review. I will also write a few  full reviews, apart from this list, over the next few days. This will be films from the first night of the festival, part 2 will be posted soon.

“A rural Sheriff’s Deputy encounters a horrific situation for which he was totally unprepared, and it’s completely captured on his body cam”

The world premier of this film was actually held on the first night of the film fest. This film is shot in first person, from the view of a body cam on a police officer. While “found footage” isn’t my favorite type of film, this one actually works. I like the use of the body cam, especially considering today’s climate revolving around a social outcry for more body cams on officers. But back to the film. The camera work, along with the editing in this film, I thought worked very well. The film felt like it was actually shot in real-time, when in fact there are a few edits, but they are hidden perfectly. I was also pleased with the use of practical effects in this film. Overall, I would rate this film 7/10

To view the full cast and crew, please visit the IMDB Page

NIGHT of the SLASHER

“A teenage girl must commit horror movie sins such as drink alcohol, do drugs, and have sex to lure a killer and finish him off.”

This film is a unique take on slasher films, and bases its self on the theme of the classic slasher films mixing comedy along with the “Slasher” clichés. Such as the fact the the main character has a check off list of all the ways to be killed in a horror film, and the killer mask is a hilarious jab at Michael Myers, as its a Spock mask. That was a laugh out loud moment for me. I think the director did really well with this short film. The SFX looked really nice with the knife attacks, wounds and blood. The editing stood out to me as well. The fight scene Ifound to be put together quite well. Overall, I would rate this film 7.5/10

To view the full cast and crew, please visit the IMDB Page

“A twisted new take on the Frankenstein legend – and the madness that surrounds it.”

The look of this film, from the sets, to the lighting, wardrobe and use of colors was absolutely amazing. it had a lot of pop to it, and set up the atmosphere for the film very well.  This take on the Frankenstein legend, and other legends, is very unique and actually ties the story together quite perfectly. While all the acting by Carlee Baker, Barrett Ogden and Rick Macy was top notch, I feel like Carlee Baker’s performance really stood out.  Looking forward to seeing more of their work. The use of practical effects were spot on, even the CGI it had in parts worked quite well.  This short was honestly my pick as best film of the whole festival. Now I can see why this film has won so many awards around the world. Overall, I would rate this film 9/10 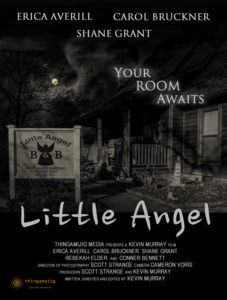 “When Laurie’s car breaks down on a dark, stormy night, she fears the worst – no cell signal, no one around – until she sees the Little Angel Bed and Breakfast. Is it a safe haven from the night, or are her terrors just beginning?”

The story of this film was very intriguing to me, as I love films that takes what we think we know about something, then turns it in a whole other direction. For this to be basically a no-budget film. Having worked on no-budget sets before, I was highly impressed. Kevin Murray did a fantastic job in the directors chair. The effects worked really well with the Angel, the film looked great, and it gave off a very creepy vibe in the darkness of the bedroom. I would rate this film 7.5/10 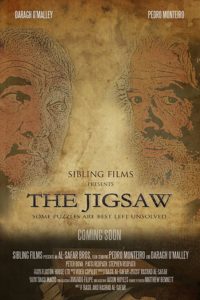 I think the thing I like most about this film is how simple, yet effective it is. The story of this short, is pretty much covered completely in the brief summery above, but by God the film just works. It looks good, the acting is great, casting is perfect I think. It is always amazing to me when a filmmaker can do something like this, with something so simple. I would rate this film 8/10

For the full cast and crew, please visit the IMDB Page 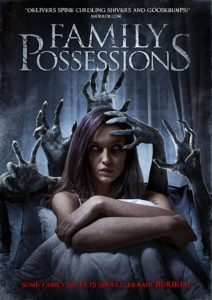 “After moving into the home of a deceased relative, a family discovers they may have inherited more than just the house.”

I had been looking forward to seeing this film for quite sometime, after I read that our very own HMF VIP Felissa Rose was appearing in the film. So I was stoked to see that it would be shown at this festival. The film had a good story line to it, but I did have one complaint, and that would be that I felt the story kind of slipped near the end. I loved where the film was going throughout the film, until near the end and a few things happened that somewhat took away from the overall film for me. The house wasn’t overly creepy looking and seemed like an everyday house that could have creepy haunting stories floating around it. Which I really liked. I loved the use of practical effects in this film. I don’t recall any CGI, just good old fashioned effects. Sadly you don’t see that as much as you used to, but it seems to be coming back around. I would rate this film 6.5/10 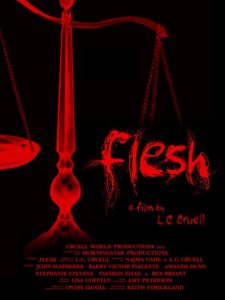 “If that annoying stack of papers on your desk represents the lives of flesh and blood people, remember that. If you don’t, someone may remind you.”

While I will admit, this isn’t one of my favorite films of the night. I think the film is ok in its own right, just not for me. But the reason I am listing it, is for one reason. Acting. John Schmedes knocked his role of Sam out of the park on this one. I was seriously blown away by his performance, and honest was kinda shocked not to see him take best actor. I have never seen any of this mans work before, but I can guaranty you I will now. I cant really rate this film, in an overall rating, so I’m going to break it down a bit. For acting, specifically John Schmedes, i’m going 9/10. For the rest, I’m going  5.5/10