Hey, FREAKS! A while back we had the chance to screen an amazing indie horror film Ekimmu/The Dead Lust and we fell in love with the film. The film follows a young couple that have a strange encounter with a girl seeking help on the side of the road. After that, strange things start to happen….but everything isn’t always as it seems. Your sins will find you.

The thing we like most about The Dead Lust is its not your generic horror film. It makes you think, and keeps you qu…estioning throughout the whole movie. We at HMF agree it is one of the best lowbuget horror films we have ever seen.

Not to mention the history behind the production of this film is one of the most inspirational stories I have heard. The creator of the film Andy Koontz was diagnosed with brain cancer during the production of the film. That didn’t stop him. He took time for his treatment, but stayed didicated to seeing this project through. That’s exactly what he did!

After gettting to know Andy a little when we heard about the film, and then screening the film, talking a lot and having him join us on a podcast. It is truly an honor for us to announce that after all the hard work, the pitfalls of filming a low budget movie, the struggles of battling cancer, and staying strong and determined to complete this movie, it is finally here! Ekimmu: The Dead Lust is now avalible for limited release on DVD!

We are proud of you Andy, and wish you the very best! 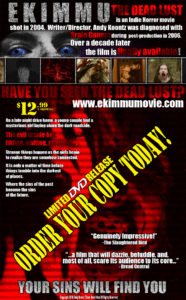 8 Horror Games to Play in October

October is the scariest month of the year, or at least portends to be. With Halloween on the 31st and a month’s worth of decoration, horror movie releases, etc. leading up to it, this is simply the time when we like to scare ourselves a little bit. And while we tend to do this mostly […]

So we admins got together and decided to put together a collection of each of our Top 5 movies we watch for Halloween. Each Admin chose 5 films. So you’ll get to know a little bit more about each of the admins who run things. Without further ado, here are the picks from each of […]

HEARTLESS (2018) A Film By Sunshine Boy Production Co.   by: Stephen Ingves   Be still my beating heart! I love receiving a film recommendation and not only having it live up to the hype but actually surpassing it. Such is the case with the horror short Heartless which is based upon the timeless classic “The Tell […]